Commercial grading is a very specialized phase of the construction process. Without proper ground preparation, construction results could vary widely from the architectural concept, groundwater may create structural problems, and improper drainage could have negative environmental impacts. 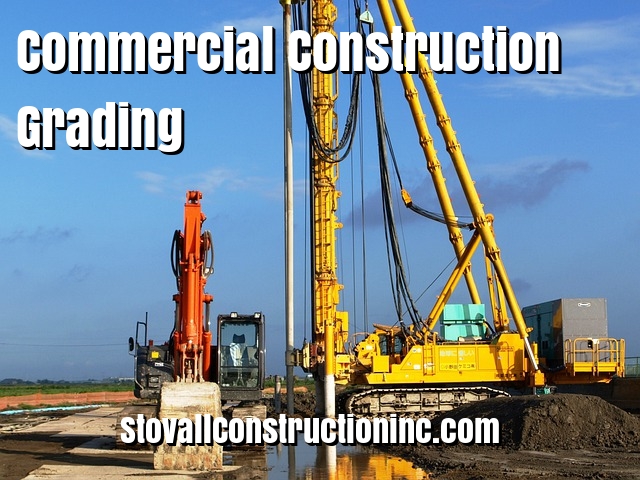 It is critical to create and execute the site grading plan professionally and to exact specifications for everything from a parking lot or small restaurant to high-rise office buildings.

What is Site Grading?

Any construction site requires some preparation before building begins, including land leveling and grading activity. Grading consists of sculpting an area of land for the needs of a specific project. The goal of grading is to:

Grading and site preparation for construction projects is important not only for the structure being built but for neighboring homes or other buildings.

Improper grading can mean water runoff will move toward the building rather than being directed safely away. This can cause structural damage from hydrostatic pressure where water accumulates around or under the foundation.

Poor grading can also result in water or pollutants being directed toward other properties, creating liability for the builder or owner of the new facility. Property damage from erosion can also occur.

Many planning and zoning jurisdictions require approved grading plans before beginning construction to guard against problems caused by improper grading or lack of compliance with land grading standards.

Types of Grading in Construction

What does grading a lot mean? There are multiple types of grading in construction projects:

Getting Approvals for Grading Projects

In many municipalities or regions, grading plans are required before work can begin, and inspections are required to achieve a passing grade after grading construction.

Grading projects are inspected, receiving a certificate of approval so that landscaping or construction can proceed. This approval indicates that the resulting elevations and proper drainage match the original grading plan.

Grading is most often accomplished using modern heavy equipment such as excavators and bulldozers for a rough finish. For a smoother finished result, graders may be utilized to produce a finer finish.

What is the difference between grading and excavation?

These terms are sometimes used interchangeably, but there is a distinction. Excavation is usually done in the beginning stages of construction for such tasks as removing soil for swimming pools, creating walkway and sidewalk foundations, and digging trenches or channels for utilities.

Grading or leveling typically comes later in the construction process, smoothing surface areas and creating an aesthetic appearance for the property. Excavation is not always necessary for a commercial construction project, with site grading producing the desired preparation.

Why Site Grading is Important for Construction Projects

Whether the construction effort is a residential, light commercial, or heavy industrial project, preparing the foundation to support the building properly will prevent structural damage from settling caused by inadequate load-bearing properties.

Experienced grading engineers will have comprehensive knowledge of where compacting is necessary to support higher demands for the intended structure, and how runoff water must be controlled with grading.

Controlling water flow from rain or other sources is a primary concern when creating a grading plan. Water must be directed such that buildings, other properties, and the environment are all considered in a responsible manner that meets all zoning and ethical requirements.

Land leveling and grading will be essential to create the desired architectural image of the finished property. This takes into account elevations and leveling needed for walkways, parking areas, driveways, patios, gardens, and other elements of the site plan.

Before grading can begin, civil engineers will create a comprehensive grading plan, describing in detail the proposed work to be done.

What Does a Grading Plan Show?

Grading plans are complex documents that include a wealth of information for engineers, construction planning, and authorities such as zoning or building commissioners.

Anyone taking a look at a grading plan for the first time can be totally baffled by the complexity and the various types of lines, numbers, and arrows. Site grading plans contain a wealth of information related to the site’s current condition and the proposed grading results. This allows examiners to evaluate the plan and either approve, make changes, or deny permits for the work.

How Do You Read Construction Grading Plans and Elevations?

Contour lines presented in dashes indicate the site’s current contours, while solid or bold lines are used to indicate the proposed contours.

Other information presented on a grading plan includes “spot elevations” that indicate the relationship to mean sea level – critical in some areas. Here again, existing and proposed values are typically represented with “x,” indicating existing values, and “+” for the proposed position.

Grading plans also provide valuable information that about trees, property lines, proposed and existing drainage lines, or other mechanisms. Additional information critical to the grading process is included, such as current underground utilities that need to be considered in grading activity.

Site grading plans will vary somewhat in content, depending on the existing and planned topology, but these examples provide a high-level look at their appearance. 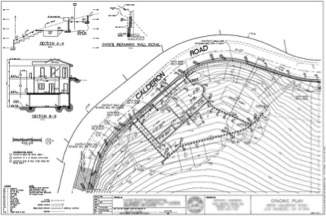 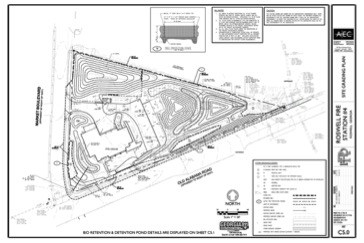 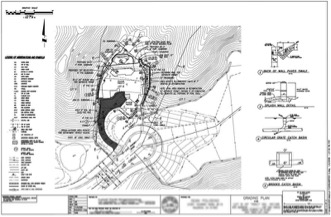 A quick look at these examples will demonstrate why an untrained eye can be confused rather than informed by the information contained in such grading plans. Creating and interpreting commercial site grading plans is a skill developed from education and experience.

What Does a Grading Plan Cost?

Both excavation and grading involve the use of heavy equipment and specialized skills in its operation. Creating a comprehensive grading plan is typically done by experienced, certified civil engineers or licensed architects.

Most municipalities and many homeowner bylaws require detailed grading plans for approval before work commences, especially for significant projects or those with potential ecological impact.

Grading plan costs will vary depending on the scope and lot size addressed in the grading plan. There are additional factors that could also come into play – drainage requirements, neighboring properties, earth composition, underground utilities, and others.

How to Get Started with a Site Grading Plan

Providing an accurate grading plan that optimizes the efficient use of existing materials will save money during the actual grading construction process. Cost-saving methods include utilizing existing soil that is being extracted from one area to fill in others, rather than simply removing materials. This results in less material movement, saving time and expense.

Stovall Construction has 50 years of experience in commercial construction and general contracting services. We can help you prepare an efficient site grading plan that saves time and money on your projects.